Xiaotian studied at Churchill College and is now the host of Talk with World Leaders, aired on Phoenix Satellite Television Company.

Mahatma Gandhi – The leader of the ‘Ahimsa’ (non-violence) non-cooperation movement in India, Gandhi. He had a very clear mind, a brave heart, a great vision, an extremely resilient spirit and the knowhow to communicate with the public. I think these are the key factors of leadership. 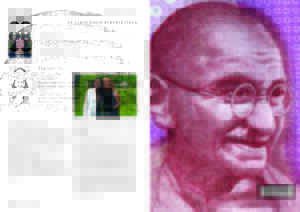 As an old sarcastic saying goes, leadership requires the arrogance of the leader and ignorance of the followers. It’s not politically correct to say this but to some extent, ignorance provides an easy environment for leadership. Therefore, one of the challenges nowadays is the diminishing of ignorance from the public.

Experience has taught me that in order to lead, one must prove oneself able to do the job. I host a programme called Talk with World Leaders, interviewing prime ministers, presidents and statesmen and stateswomen when they visit China or by invitation to their countries. This is one of the oldest programmes on the channel so all the team members including the producer, planner and editors are all senior staff used to working with my predecessor, an extremely well-renowned host in his late sixties. When I first took over I realised there were some things in this programme I would like to change. It was difficult. As the youngest member in the team and a female working in international politics, my opinions were not listened to. So I started to offer my help to all the team members: instead of trying to persuade them with my ideas, I was doing all the jobs for them, both background research and post production! Having seen the programme almost entirely made by myself, my point was finally proven and of course they followed my ideas in the end.

This is one of 25 Leadership Perspectives in a book published by the Møller Institute to mark its 25th anniversary year entitled Leadership Perspectives. The book, which you can download here, features 25 leaders talking candidly about what they believe to be the greatest challenges facing leaders over the next 25 years.