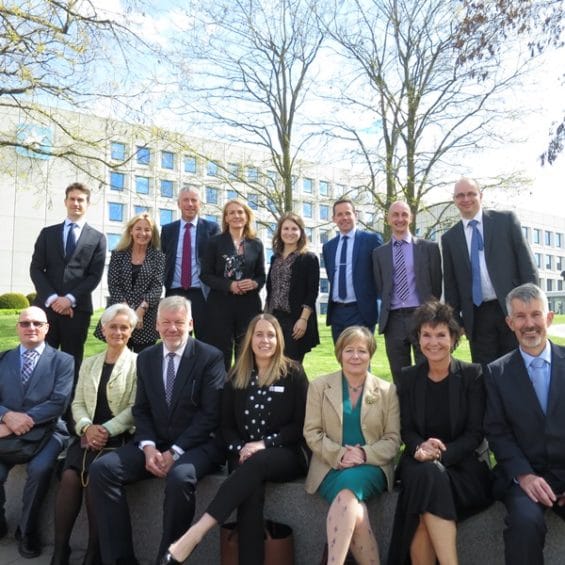 To develop a deeper understanding of their Danish heritage, and connect with their Founder, Maersk, a team from the Møller Institute visited the place where their story began, Maersk Head Office in Copenhagen.

The team were welcomed by Henrik Tvarnø , Director of the A.P. Møller and Chastine Mc-Kinney Møller Foundation which founded the Møller Institute at Churchill College as a ‘Centre of Excellence’ in 1992 to unite business and academia for executive education.

Gillian Secrett, CEO of the Møller Institute explained, “I was so proud to bring members of the Møller Institute team to Denmark and for them to enjoy a private tour of the Maersk museum, charting Maersk’s growth from a steamship company in 1904 to the present day as the world’s largest shipping company focused on innovative supply chain solutions. We were particularly struck by the sense of history, place and purpose and how we are a small part within the story because of Mærsk McKinney Møller’s belief that Denmark’s safety during the Second World War and prosperity afterwards had depended on Churchill’s personal involvement. This motivated him to recognise Churchill’s involvement and build a ‘Centre of Excellence’ at Churchill College in Cambridge, which brings together business and academia for executive education in order to extend the reach of the University to benefit society in line with the purpose of the Møller Foundation. The museum showcased Maersk’s distinctive set of Core Values which drive the way they do business. Our business is also founded on a strong sense of purpose and core values, including Maersk’s value of ‘Constant Care’. It was fascinating for the team to understand how these values were also ingrained into Maersk’s operations by the Møller family, and have remained guiding principles, governing the development of A.P. Moller – Maersk for over a century. I have had the privilege of meeting Mr Møller several times over the years and was greatly inspired by his leadership, commitment and values; his watch words of ‘constant care’ have been with me throughout my career at the Møller Institute. Our visit enabled my colleagues to share the inspirational influence he has had on my working life and how it has shaped the work of the Møller Institute.”

Peter Jørgensen, Project manager at BIOFOS, the largest Danish waste water utility, attended the workshop having been invited as a Churchill College Alumnus explained, “It was fun to connect with Churchill College in Denmark to hear and share ideas and experiences of leadership development. I found Dr. Srai’s “tour de force” introduction to 12 digital supply chain transformation scenarios, coupled with the recommendations on how to nurture ‘digital attitudes’ in your organization, to be highly inspiring and relevant for leaders across most sectors and industries.”

Cathy Butler, Head of Executive Education at Møller Institute explained, “The workshop was at Saltoftehus, close to the industrial city of Kalundborg which has a strong life-sciences focus. We were joined by around 30 senior leaders from Danish organisations including; Danfoss, Novo Nordisk, Novozymes, Oracle, Siemens, and Ørsted. The morning of the workshop was led by my colleague Ruth Berry, Programme Director, who focused on ways to develop ambiguity tolerance, preparedness, and personal resilience. In the afternoon, Dr Jagjit Singh Srai, Head of the Centre for International Manufacturing, Institute for Manufacturing gave his views on how leaders can shape future global supply networks through digital innovation.”

The workshop collaboration was the brainchild of Birgitte Boserup, CEO and Owner of conference centre Saltoftehus at Saltofte Estate, who visited the Møller Institute two years ago, recommended by the Danish UK Association in London. Having previously worked for AP Møller Mærsk for several years, Birgitte “instantly felt at home” at the Danish-inspired Møller Institute: “What really laid the ground for my wish to connect Møller Institute to Saltoftehus was the staff and their obvious pride in their workplace, its history, leadership development focus and what values it stands for – we connected so well and I’m so proud this collaboration has come through.”

Gillian’s affection and focus on building positive relations with Denmark developed as a result of the strong connection with Møller Institute founder, Mærsk McKinney Møller and has not lessened as a result her receiving the honour of a Knighthood of the Order of Dannebrog from the Queen of Denmark in recognition of her services, promotion and support for Denmark and Danish-British relations in the UK.

The Møller Institute was built in 1992 with a donation from the A.P. Møller & Chastine Mc-Kinney Møller Foundation, a Danish institution established in 1953 by shipping magnate A.P. Møller. The Foundation makes contributions to good causes, especially those involving national heritage, shipping, industry and science. Mr Møller was keen to support a development in memory of Sir Winston Churchill because of the College’s tradition of excellence in the fields of science and engineering. A donation was made to Churchill College and in 1992 The Møller Institute was established and opened by Her Majesty Queen Ingrid of Denmark.