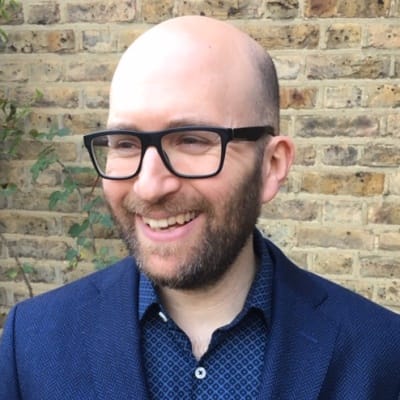 An experienced coach and facilitator, Steve works with individuals and organisations around the world at all levels focusing on real-time practice of effective communication. Crucial conversations, the behaviours underpinning EQ at work and the process of presenting and communicating often technical information in an engaging and empathetic way.

Steve is Programme Director of Leading through Narrative a highly practical, experiential and interactive programme that examines and develops the crucial skill of leadership narrative. Find out more.

Steve began his career as a commercial litigation lawyer first in a London-based global firm before practising in the West-End of London. During his time as a practising solicitor Steve began doing stand-up and sketch comedy open spots around the country as a hobby. After winning a prestigious national ‘new act’ competition, Steve found himself signed and touring with the largest comedy agency in the UK and presenting and acting both on radio and TV. Giving up private practice, Steve balanced his performance career (nearly 1500 live shows) with a career delivering skills training for lawyers and those working with lawyers in firms – performing at night and training/coaching/role-playing during the day.

Eventually focusing on the training and coaching full-time, Steve’s passion for learning and development became his sole focus. Before moving into consultancy, Steve worked in-house as a business coach and legal-skills facilitator for Bryan Cave Leighton Paisner (formerly BLP) before managing firm-wide legal training for SJ Berwin. Steve then took on a global lawyer skills-development role at Ashurst before becoming Head of L&D for a UK top 100 firm in Mayfair, London.

Steve aims to bridge the gap between theory and practice in all of his work. He leans on experiential learning techniques to highlight practical learning outcomes and is passionate about helping individuals increase their self-awareness believing that small behavioural adaptations can have a huge impact on individual, team and organisational success.

In everything that Steve does, he consciously leans on the power of narrative and story. He actively uses his comedy performance experience to bring a relaxed, informal and light touch to client solutions. Levity, he believes, is vital in the context of development.

Steve also works with organisations in a consultant-capacity helping them to design, embed and implement effective learning and development strategies with the aim of embedding sustainable and meaningful people development. Steve works with organisations across a range of sectors, including financial services, pharmaceutical, entertainment, PR and professional services.

Lumina Spark, Insights Discovery, FIRO B, Belbin, EQI2.0, Online Learning Facilitator with the Learning Performance Institute (‘LPI’). Steve is qualified as a coach with the Oxford School of Coach Mentoring (CIPD). Steve is an experienced business role-player and skills practice facilitator and also has a Certificate in Brain-Based Conversations Skills from the Neuroleadership Institute.

Steve’s book, ‘21st Century Solicitor: How to make a real impact as a junior commercial lawyer’ (Bloomsbury Publishing) honed in on some of the foundation elements for a meaningful lawyer ‘brand’ early on in the legal career journey. ‘A tome of exceptional clarity’ (The Times).

As a writer: various (including BBC including Mock the Week, Channel 4 and Channel 5)