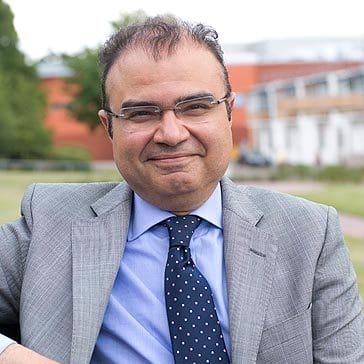 A passionate and visionary Healthcare leader with unique experience of leading a NHS Trust under both NHS management and a pioneering public-private partnership. Hisham extended his experience beyond the UK to China and the Middle East. Hisham believes that many healthcare challenges are global and need global collaborative solutions. Hisham’s goal is to continuously pursue high quality, patient-centred, cost effective and safe care solutions. His belief is that leadership and innovation are the most effective means to achieve such a goal and is proud to be a respected consultant clinician. Consultant Gynaecologist , Medical Entrepreneur and Former NHS & Private Healthcare Chief Executive

Hisham Abdel-Rahman graduated in 1985 from the Medical School of Cairo University. He then served in the Egyptian military forces to the rank of Lieutenant Colonel. In 1994 Hisham started his clinical specialist training in the Cambridge deanery. Hisham acquired membership of the Royal College of Obstetrics & Gynaecologists in 1996 and the UK Certificate of Completion of Specialised Training in Obstetrics and Gynaecology in year 2000.

Hisham joined Circle Health in 2012 as Senior Executive Partner. Circle Health Limited is the largest clinical partnership outside the US, with over 2000 member clinicians in the United Kingdom. Circle Health was the first private healthcare company to agree a franchise agreement with the NHS to run a NHS Hospital. As Hinchingbrooke Hospital Medical Director and Chief Executive, Hisham gained a unique experience during the franchise process as well as the dissolution of the franchise three years later. Hisham was Medical Director of Circle International in 2015.

Hisham joined several executive leadership institutes as a trainer. He joined Circle Academy as a founding member in 2012. In 2015 , he joined the All China Women and Children Association as Medical Advisor and Leadership Trainer. In 2015, he joined the Møller Executive Education team at Churchill College, Cambridge University as an Associate. Hisham is an executive mentor for the BMJ as well as other UK and international organisations.

Hisham is an associate to several healthcare innovation companies in genomics, robotics and AI. He is associate of Cambridge Medical Robotics since 2015.

Hisham started health care collaboration with China in 2014. He supported healthcare projects with several Chinese State Owned Entities including CITIC bank and Taiping Insurance. He worked as an International Adviser to several Chinese Healthcare Associations. Hisham delivered executive training to several Chinese delegations at the Møller Institute since 2015. Hisham moved to Shanghai in 2016 as Circle Harmony Health Ltd CEO, where he completed the setup of a comprehensive healthcare operating system with the first facility to open in April 2018.